Exported URL doesn't work in Windows but in Mac book

How to create pop-up window with version 7.1.0?

We are now 4 months after the release of JustinMind 9. I've spent some time today to see if I was able to import my prototypes created on JustinMind 8 in the version 9. The answer is no because the result is a total disaster. In the new version the size and position of multiple elements are changed. The simulation gives crazy results. The interface is buggy.

I am now wondering if you have tested your app before releasing it. At least for the Windows version (don't know for the Mac one), the version 9 looks more like a beta than a final release. I am shocked that you continue to advertise about new features (such as the super iFrame functionality in the 9.2.2) whilst we cannot even retrieve our work from the version 8. I am extremely disappointed and upset. I am now wondering if you are working on these issues or if you expect us to just throw away years of work ?

Attached, just a few screenshots to evidence the current disaster. The following points are illustrated and compared between the version 8 and 9:

Point 1 - text tables: cell size & contentIn workspace, in v9 the size of most text table cells is not retrieved properly . The content of the cells are not properly placed either.

In simulation, in v9, there are huge difference between what shows the workspace and the simulation results.

In simulation, in v9 the results are crazy.

In workspace, in v9, the image is placed correctly.

In simulation, in v9, position is wrong.

Bonus - illustration of the buggy interface:

Point 5 shows that the selection is not reflected in the layer window. You know why ? Because the element is at the very bottom of the list, however there is no scroll bar to display it !!

Point 6 shows that I cannot resize the layer window (actually, not any undocked window). The reason being that the button allowing to resize the window is out of my screen (in a 1920x1080px resolution). After some tedious manipulation I could display it and resize the window. Bad luck, each time I restart the application the window gets resized and the button disappear ! Amazing !

I've loved worked with Justinmind over the past 4 years, but the way you've managed the last release worries me a lot. A brand new version can be buggy the day it is released, but not 4 months later ! Now, can you please bring clarity on when all these critical issues will be fixed ?

This issue has been resolved in the most recent update of Justinmind.

Thank you for reaching out and submitting each of your points. I would like to go over them point by point and address them accordingly.

For the first point you brought up, could you attach a screenshot of your Simulation Settings? You can go to File - Simulate - Settings, depending on what it's set to could have a huge impact of how your prototype is displayed in the Simulation than in the Workspace.

Here are the simulation settings retrieved from JiM 9.2.2 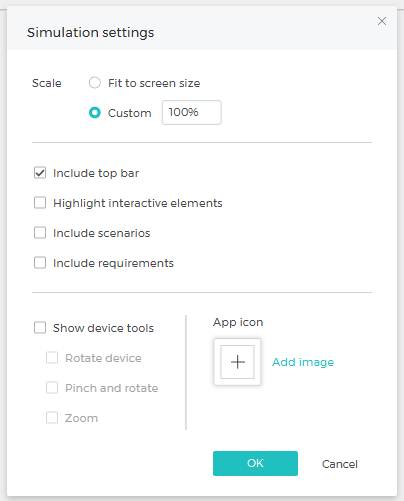 Thank you for submitting these points, they are helpful. If it's not too much trouble, could you attach your prototype so then I can cross-refence for bugs and get those submitted so then they can be fixed?

I'm sending you the files by email on jim.development@justinmind.com since your website does not accept my .vp files.

We were able to reproduce the error you were experiencing and are working for a fix for the next update that will be released in 2-3 weeks.

Thanks for the feedback Chloe.

This is a good news. Looking forward to see the result of this fix.

This issue has been resolved in the most recent update of Justinmind.

I've done some test. All issues raised in this ticket seem to be solved, indeed. Thank a lot !

Nevertheless, I still detect some other import issues when I open some complex prototypes created with JiM 8.3. I'll raise a separate ticket for these issues when I have a bit of time.

Happy to help! Please reach out if you have any other questions!