"Absolute" is not "Absolute"? Understanding "position: absolute" and its effect on "Move" actions

How to position an object relative to another one?

How to get the position of a component, taking scrolling of dynamic panel(s) into consideration?

I have a scrolling panel in my prototype that contains buttons that trigger a pop-up menu. I want to position the pop-up menu to appear just below the button, taking into account the fact that the panel may be scrolled.

I cannot find any combination of "Pos.Y" and "Pos.Y absolute" that does this for me. The absolute Y position of the button does not appear to be affected by the scrolling of the panel, so I'm not sure how to make this work.

Ping. Any word on this question?

You need to place the pop up menu inside the scrolling panel and place it where you need. Then you need to create an event . (See details at the attached screenshot) In case you need further assistance feel free to contact us and I'll send you the vp file example. 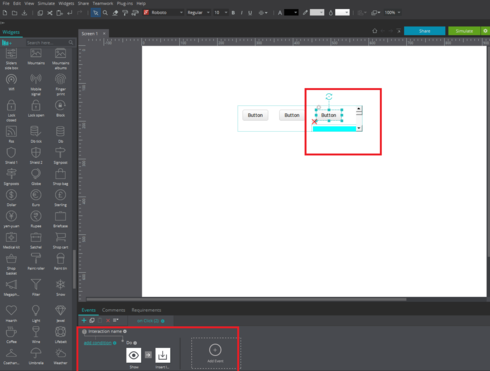 Thanks, but I guess I wasn't clear in my description: there are *numerous* buttons that pop up that menu. The menu needs to be repositioned relative to each button when it appears. I don't want to have many duplicates of the menu, just one.

I think I may need to look at doing it with masters (so that I can have a single place to maintain the menu itself), even though having the menu repeated all down the page seems silly.

Bottom line: It's impossible to calculate a position that takes scrolling into consideration?

Hello again. I'm back with the same question, because it remains unanswered:

How can I calculate a position that takes scrolling into consideration?

Please note that I do not want an answer that explains how I could make something static that is *almost* like calculating a position that takes scrolling into consideration. I want to know exactly this, and nothing else:

How can I calculate a position that takes scrolling into consideration?

I have a scrolling area with a dozen or more buttons that can pop up a menu. Rather than have dozens of identical menus (which must all be meticulously maintained to keep them in sync with one another as changes take place in the prototype), I want to have ONE menu that pops up in the right place within the scrolling area.

I am using the absolute position of the buttons to attempt to calculate the menu position, but to no avail. This is the calculation:

The button named "Queue-New-Item_3-Action-Btn" is inside a dynamic panel that scrolls. There does not appear to be any way to position the menu relative to the button when the panel is scrolled.

Because I can't wait for an answer, and the answer is almost certainly going to be "No, you can't," or "No, but you could [something that does not satisfy my requirements" instead," I gave up and I am using "Cursor Y," which does not give me what I want, but gets me within 8-12 pixels of what I want, which is going to have to be good enough for now.

Please consider adding [scrolling_component].Scroll_Y (and .Scroll_X) as values that can be used in calculations. This would make it much easier to create simulations that are precise and behave like the products we hope to build.

Sorry for our late response. Remember that as an owner of a license you can send any inquiry you might have through our Customer Support Portal and you will obtain always a faster response.

Thank you for reminding me that the Support Portal exists: I've never used it (although I see that I have three resolved cases in it — those came about when I was asked to email files in support of questions asked here). I had no idea that there was another place to get support than here on Justinmind's Community.