It used to be that I could drag a variable that I knew contained "true" or "false" into a condition and save it, with the understanding that it meant "when this variable is true". 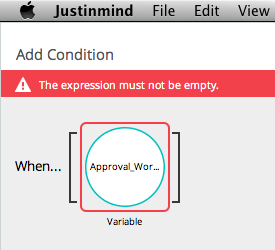 In order to use a variable as a boolean, I need to do this:

Or, by flipping the logic on its head, this:

It stands to reason that if "(not) variable" works, then just "variable" should work. Either that, or we need an operator that means "not not" :-).

As a developer, the fact that the following is allowed...

Thank you for reporting this behaviour. IWe made some modifications to conditions and the usage of boolean variables is now strange.

We will fix it in one of the future updates. We'll make sure to notify you.